‘Mary Queen of Scots’: The Historical Film for the Modern Age 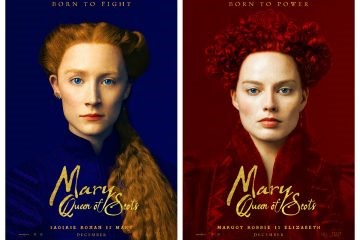 A retelling of the classic friendship and rivalry between Mary, the queen of Scotland, and Queen Elizabeth I, the queen of England, is presented in the new movie Mary Queen of Scots. With spectacular acting from Saoirse Ronan and Margot Robbie playing these respective queens, the film is a cinematic masterpiece.

The story between the two queens has been told in all kinds of media, from textbooks, to novels, to even another movie with the very original name Mary, Queen of Scots in 1971 (note the comma). Two distantly related cousins both rule without kings in a world run by men. Mary is the queen of Scotland but has the right to rule France (by marriage) and the right to rule England after Elizabeth (she is a Stuart). This creates an interesting relationship between Mary and Elizabeth. Each fears the other for the power she has. However, they each respect the other as another queen trying to keep her throne away from the men who advise her. Their story ends with Mary being beheaded on Elizabeth’s orders.

This new adaptation, however, is like hearing an entirely different story. For many that means one thing: it’s flawed.

But is it? History depicts Mary as a murderer, adulterer, and a crooked woman. But what if she was none of that? What if she was just presented that way by the men who wanted her throne?

As the times change so does our interpretation of history. The new movie Mary Queen of Scots focuses on a queen with twice the brains, twice the heart, and a quarter of the respect afforded to any king that could have stood in her place.

She is backstabbed and tricked and threatened by the men who advise her and want her crown. The only person who she sees eye to eye with is, surprisingly, her rival Queen Elizabeth.

Queen Elizabeth I is going through the same hardships herself, and she eventually decides to stop acting like a woman, to not marry, to not have child, and to become what she is fighting.  Only after this change occurs does she become the hard and serious monarch we see in history.

That’s the moral of the story, really: woman > men. The men in this movie are a misogynistic, terrible group who have one thought: why can’t these women just do what they’re told? This movie makes its point very clear. It says that men can’t stand powerful women. In fact, there is only one man in this movie that does not think this way and he isn’t exactly treated well…

Mary, Queen of Scots is a feminist movie for the new age of feminism. And, in this reviewer’s opinion, is the most truthful retelling yet.

It is a stunning movie to watch. Not only with the wide shots of Scotland but with the exquisite makeup, costuming, sets, camera angles, and visual parallels, it’s impossible to look away. Especially a particular scene where we shoot back and forth between Elizabeth and Mary as Mary has her baby and Elizabeth makes paper flowers. Mary has a trail of blood on white sheets leading up to her, a baby in her arms, while Elizabeth has nothing except a trail of red paper. That shot alone highlights Elizabeth’s misery more than any dialogue could have. Be sure to see it on the big screen for the full effect.

I would talk about every great performance in this movie, but Saoirse Ronan and Margot Robbie didn’t let me focus on anyone else. Just as these powerful queens were in real life, Ronan (Mary) and Robbie (Elizabeth I) were in complete demand of my attention.

All in all this is the historical movie for the modern age. With a diverse cast despite the setting and time period, representation of the LGBTQ+ community, and portrayal of powerful women, it is guaranteed to make the racist, misogynistic, sexist viewer keel over. I rate this movie 4.5 stars out of 5.