Joe Biden addresses voters’ concerns regarding his campaign and coronavirus 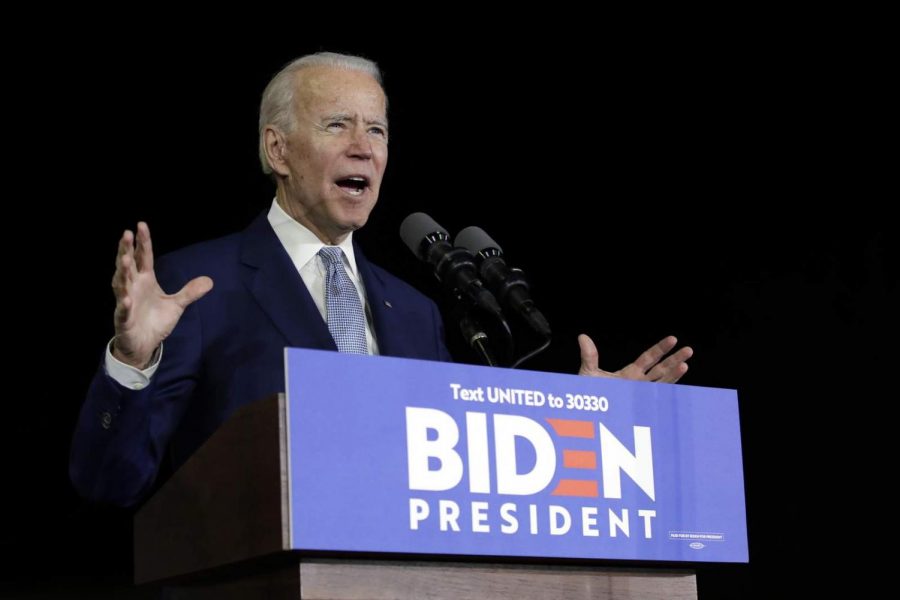 Joe Biden speaks behind a podium at one of his campaign events.

On Monday, March 16, 2020, Democratic Candidate Joe Biden held a virtual town hall meeting to address the current concerns regarding the coronavirus to potential voters, as well as to answer general questions about his campaign.

The conference began with an introductory speech from Biden’s wife, Jill Biden, who listed her reasons for why she believes her husband is the best choice for the Democratic Nomination, giving reasons such as his leadership skills and plans for healthcare, climate change, and gun safety.

“The presidency isn’t just about a bold agenda, but about true leadership.  Having the forethought to prepare for the worst, the backbone to lead through chaos, [and] the character to move beyond politics and get to the heart of helping people.  There is no one more prepared to meet that call than Joe Biden,” Jill Biden said.

Joe Biden first addressed the current pandemonium surrounding the recent coronavirus outbreak in the United States.  Many citizens had expressed their concerns about the potential spreading of the disease while waiting in line to vote, especially those living in states that are scheduled to vote in the upcoming weeks.  He emphasized that his top priority is the safety of the American people, especially during this time of social distancing.

Additionally, Joe Biden voiced his support for the guidelines that have been put in place by State Public Health Officials to ensure that the virus doesn’t further spread among Americans when they leave their homes to vote.  Enhanced cleansing of voting machines and hand sanitizer will be provided to voters, while states in high-risk locations will close polling all together.

“There is no more important duty for our leaders than ensuring safety and security,” Joe Biden said.

The bulk of the meeting allowed callers to discuss their questions and concerns directly with Joe Biden.

In response, Joe Biden stated that he would alter the current Forgiveness Program so that more graduates will be eligible to qualify, as well as clarify that the student’s debt would be reduced to $10,000 per year for the five years while they are serving.  Joe Biden added that those currently in service programs who are still paying off debts would also be able to qualify for this plan under his presidency.

In addition to these education plans, Joe Biden proposed giving free tuition to students attending community colleges and state universities, as well as doubling the amount of current pell grants from $6,000 to $12,000.

“This would vastly expand the [opportunities] for people to get an education,” Joe Biden said.

Another question from an Illinois citizen named Lucy, who spoke on the behalf of her 91-year-old father, raised the topic of the second amendment and gun control to Joe Biden as she explained her father’s views on the subject.

“There used to be a need for people to protect themselves […] now there are so many other ways to protect ourselves […] and that keeping guns to a minimum is not violating our Second Amendment right since we don’t need guns like we used to,” Lucy said.

In response, Joe Biden spoke about his own time as a constitutional law professor, where one of the subjects he taught was the Second Amendment, explaining that there is a large amount of debate surrounding it because of the vague language used.

“The second amendment never from the beginning has said that you are able to own any kind of weapon or that just anybody is entitled to own a weapon […] there are those who argue though that you need to have weapons to protect yourself against the federal government […] but the idea that having certain weapons like an AR-15 or a machine gun to protect yourself from the government is simply not rational,” Joe Biden said.

To prevent future gun violence, Joe Biden’s plan of action is to form a universal background check for all gun sales in order to close any possible loopholes during purchasing.  He also plans to implement a requirement that does not allow a person to handle or buy a gun unless they have a license to do so.

Biden also plans to establish a National Task Force to study the connection between mass shootings, harassment, and domestic violence in order to prevent actions like these from continuing in the future.

Under his potential presidency, Joe Biden hopes to bring the citizens of the United States together to create a sense of unity and a feeling of security across the country, as well as continue to inspire Americans throughout hardship

“The President of the United States should be a commander in chief you can trust, and a leader who brings people together instead of tearing them apart, believing that our best days are ahead of us.  That’s the future my husband Joe Biden can deliver,” Jill Biden said.