“The Percy Jackson Musical” an electric experience for any theater-goer 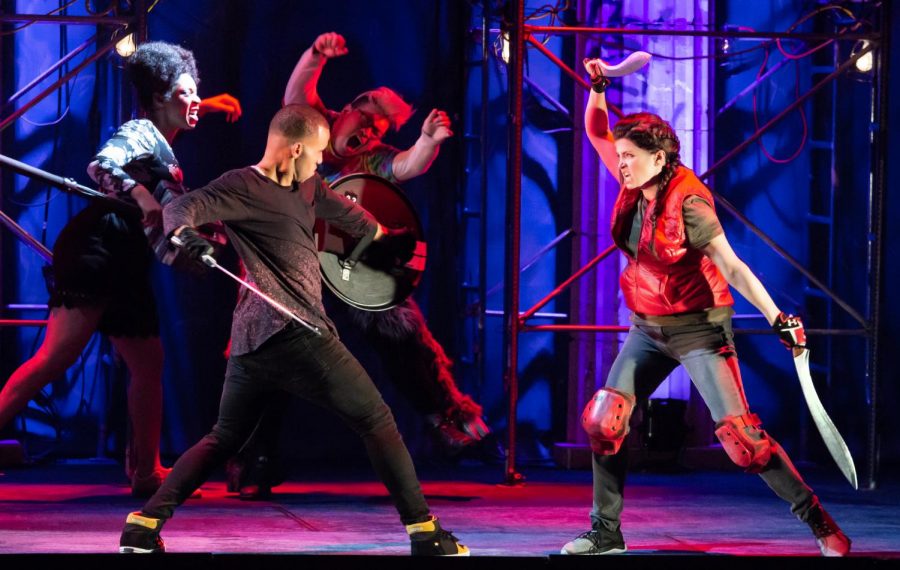 Sword play is just a part of "The Lightning Thief: The Percy Jackson Musical" at the Huntington Theatre through July 28, 2019.

I’ve always found most theatrical productions to be a chore to appreciate. Maybe it’s just me, but sitting for hours on end in a squeezed theater, flipping through a program to follow along with often indistinct dialogue and ever-changing situations isn’t exciting.

Having said this, “The Lightning Thief: The Percy Jackson Musical” at the Huntington Theatre in Boston is the most fun I’ve ever had at the theater.

The story follows Percy Jackson, a sixth-grader who discovers he is a “half-blood” (half-human, half-god). Percy has a rough upbringing: being expelled from school, and having to come to terms with a stepfather whom he resents. After tragedy strikes, Percy finds himself in an even more chaotic world of demigods and monsters. If that wasn’t bad enough, Percy is wanted for stealing Zeus’s lightning bolt. It’s a story about growth and development as Percy wrangles with who he really is.

Originating from Rick Riordan’s fictional book series, the story of Percy Jackson has not only been adapted for Broadway but film twice. While I never read the books, I always thought that 2010’s film adaptation, “Percy Jackson & The Olympians: The Lightning Thief” was a solid movie. It wasn’t groundbreaking, but the CGI monsters were intriguing enough to keep me watching as a 9-year-old. Still, as a musical in 2019, director Stephen Brackett brings back that same childlike wonderment to grown-up audience members.

On stage, accomplished actor Chris McCarrell did an excellent job playing Percy Jackson. McCarrell’s facial expressions and overall demeanor helped the audience sympathize with his character’s growing confidence throughout the musical. During the first sword fight, for example, McCarrell’s confused look and awkward sword-swinging showed Percy to be unprepared and aimless. But when a similar fight erupts in the final act, McCarrell’s upright posture and swift handling of his sword show that Percy is more confident with his identity as a half-blood.

McCarrell wasn’t the only actor that stood out. Kristin Stokes’s portrayal of the daughter of Athena, Annabeth, alongside Izzy Figueroa as Percy’s horse-legged protector, Grover, added depth to Percy’s journey. But while Figueroa jived well with McCarrell, there were times where Stokes’s Annabeth felt forced into the narrative. Annabeth’s role in the story starts to make sense in the second act, but an earlier introduction to her backstory could have better contextualized her character.

The show also featured a list of substantial musical numbers. All the actors had strong voices and were able to harmonize well with one another. In particular, Jalynn Steele, playing the role of Percy’s mother, had a beautiful voice, especially in the first act with “Strong” — a sentimental duet with McCarrel.

While the actors all did an excellent job singing, I can’t say that there was one musical number that defined the show. Some songs, such as Stokes’s “My Grand Plan,” help to construct the story, while other songs, such as Figueroa’s “Another Terrible Day,” were downright hilarious. However, there isn’t that one song that’ll be stuck in audience members’ heads for days. Nonetheless, composer Rob Rokicki’s bold usage of different instruments sets the tone of each scene, while the lyrics integrate smoothly with the rest of the script.

However, what undoubtedly stole the show were the special effects. Lighting specialist David Lander and sound designer Ryan Rumery deserve high praise for their spectacular yet tasteful showcase of sound and lighting. There were some moments where my jaw dropped, and I found myself in disbelief of how much care was put into the lighting and sound effects. Nevertheless, the lighting created a perfect ambiance in each scene while the sound effects never felt unwarranted. Every special effect made sense and was a treat for audience members to experience.

Taken as a whole, “The Lightning Thief: The Percy Jackson Musical” is a show that anyone can watch and have a good time. A solid cast of actors fit their roles nicely for longtime theatergoers to appreciate, but the spectacular presentation allows theater novices, like myself, to enjoy. This is a musical that’s just plain old fun for every audience member.