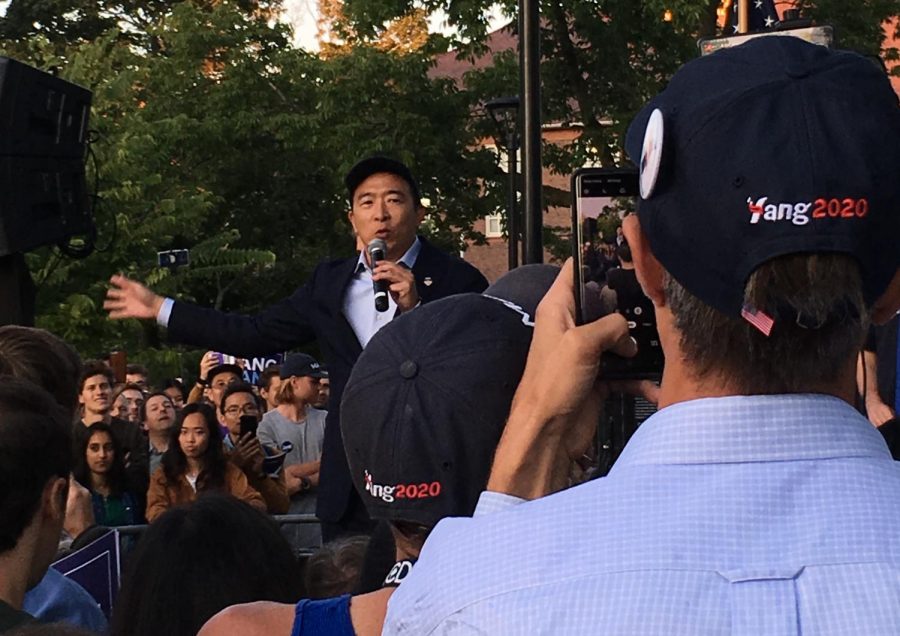 Andrew Yang, one of the Democratic candidates of president, addresses the crowd on Cambridge Common during a campaign stop Monday, Sept. 16, 2019.

Andrew Yang is running for the Democratic nomination for president, and he certainly has a lot of supporters. That was apparent Sept. 16, 2019, when he held a campaign rally at the Cambridge Common.

“Andrew Yang, to me, is the first candidate that’s come around that is solutions-based,” said one of his most enthusiastic supporters, Marcus, a teacher from Chelsea. “He sees a handful of problems and he has solutions to fix them and those solutions are always backed by data, math, and a team of really smart people.”

One solution that Yang has proposed is the Freedom Dividend, which was highlighted in the democratic debate Sept. 12, proposing giving “$1,000 a month for an entire year to 10 American families.”

Well, how does Andrew Yang propose we pay for all of this? The answer is, simply put, charging companies who use the data mining that comes from shopping online and social media.

While some people are full supporters and a part of a group known as the “Yang Gang,” others came to Cambridge Common looking for more information on why Yang should be their ideal candidate. Joohe, who did not previously know about the Freedom Divided, was there with her dog, Nashi. She said she wanted “to learn more about his foreign policy platform and also some realistic plans to execute a basic income of $1,000 a month.”

Although Yang did not talk about his foreign policy plan, he did touch upon empowering women, the declining life expectancy rate, the cost of a college education, and technology putting people out of jobs. His solution? The Freedom Dividend, the first step to addressing America’s problems.

Yang ended his speech with a memorable line: “Show the country that it is not left, it is not right, it is forward!”