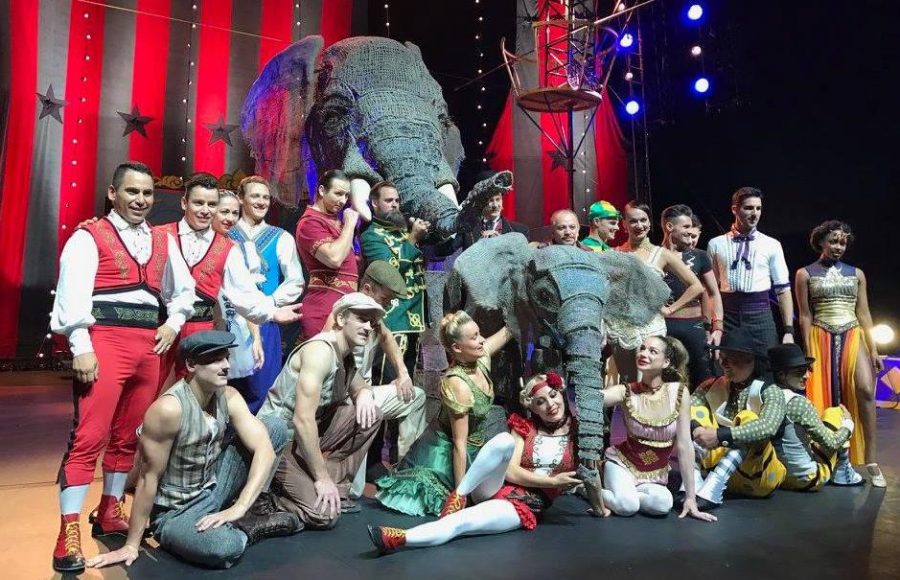 The cast of "Circus 1903" poses before its embarking on its 2017 tour of the United States.

The night started with the ringmaster throwing popcorn at and joking with unsuspecting theater-goers as he walked among them, proclaiming he could do so because it was a circus. He encouraged the audience to cheer more loudly, as polite clapping was reserved for plays, not circuses.

From then on, the house was packed with joyous people immersed in the year 1903.

This was “Circus 1903,” on a March night in 2017 performed at the Boch Center for the first time in Boston.

There were more near-perfect performances in “Circus 1903” than bad moments, including a balancing act, a family of performers on a tightrope, and a fabulous juggler. I was on the edge of my seat during the show — literally. I found myself and my little sister leaning forward into the action at various moments throughout it.

The lighting, music, and puppetry brought 1903 together into a spectacle of talent and imagination impressive for a first performance in a new city. The stage elephants were probably the best part, maneuvered by puppeteers who made them behave like real animals in a beautiful manner.

Act I followed the process of setting up the circus (hoisting the tent, etc.), and included stellar performances by a contortionist (ouch!), an artistic cyclist, an aerialist, and a physical comedy duo. The talent of these individuals was breathtaking, and I would question any person who would not be entertained.

Act II had some kinks. Children from the audience were brought on stage for an act centered around a spring puppet of a raccoon and an assortment of ringmaster comments that seemed mean-spirited. He embarrassed children who had run up to volunteer or asked them to bring up their younger relative with an awkward phrase similar to, “Thanks, but we don’t need you.  Go back to your seats.”

Other things he said were uncomfortable. There was a joke about a Native American chief. He told two 10-year-olds to “gaze into each other’s eyes” and then said, “You’re welcome.” He called those same two children “Stretch” and “Tablecloth,” as the girl was tall and the boy wearing plaid. He took the audience out of the target year by giving commentary on Lady Gaga and Legal Seafood.

The second act featured mistakes from two gymnast brothers, including one dangerous looking fall. Despite their disappointment, they got the crowd back in the palm of their hands and executed what they previously could not in a true professional fashion.

The show ended with a moment between a young volunteer and the ringmaster, who showed heart with his words, telling the boy that wonderful things were going to happen to him in his life and assuring him that, “Life is like a circus.”

Even when mistakes were made in “Circus 1903” and performers were visibly frustrated,  the audience got them back in the mood with roars of approval.  It was as if everyone was a kid, finding the magic of the circus once again.