The Imposters are Among Us

Theresa Brouillet from The Oakmonitor at Oakmont Regional in Ashburnham, Mass., was a winner in Headliners in Education’s February/March 2021 contest for Best Anything Else Story

The beginning of the game shows you who your partner imposter is.

(Theresa Brouillet from Oakmont Regional in Ashburnham, Mass., was a winner in Headliners in Education’s February/March 2021 contest for Best Anything Else Story. Read the original story in The Oakmonitor HERE.)

The lights started to dim as I sliced Orange’s head off. I quickly run to the vent, and pop out before anyone sees me here. I then run to fix lights, looking for an alibi and try to pin the kill on someone else.

Among Us is an online multiplayer game that was released on June 15, 2018. It wasn’t until recently that the game blew up due to people posting clips on Tik Tok. The game is available for free on IOS and Android, and costs $5 for PC players. 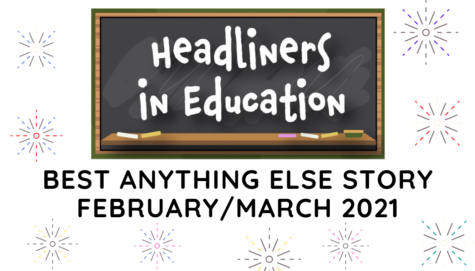 Anywhere from 4-10 players will attempt to prep a spaceship by completing tasks around the map. You need to be careful, the secret imposters will be lurking around the map trying to kill you and prevent the spaceship from taking off. The goal as a crewmate is to either vote off the imposters, or complete all the tasks to win. If you’re an imposter, the goal is to kill everyone and not get caught.

The host of the game has the opportunity to adjust the settings. They can adjust the amount of imposters, player speed, confirm ejects, ect. This keeps everyone on their toes, and individualizes every game.

At the beginning of the game, you get notified of your role and the game starts. Imposter. As an imposter, you can do certain things that crew members can’t do. For example, imposters can vent into rooms, or out of rooms, to get sneaky kills. The crew members can see you vent, so you have to be careful because if they catch you in the act then they’ll know you’re imposter.

I run to the right side, with Pink following me. I quickly kill pink, and vent out before anyone sees me. I meet up with Cyan, and stay with him until the body gets reported. That way he can vouch for me being safe.

I pull up my sabotage map, and click the reactor icon. The blaring horn of a sabotage goes off, and I immediately leave. Some of these sabotages can end the game if they aren’t completed right away. A timer will pop up on your screen, and will start counting down to 0. If you don’t complete it in time, the game will end and the imposters win. As an imposter, the only tasks you can fix are the sabotages. I fixed the bottom reactor, as Yellow fixed the top.

Shortly after, the report button was pressed. Everyone starts frantically typing in the chat asking where the body is. “I was with Yellow and Cyan in the reactor.” I quickly typed, hoping no one saw me go right side at the beginning of the game. “Anyone sus?” I asked. The crewmembers start accusing random people as I lay low. I try to also keep the blame off of Black, who is the other imposter. We all decide we don’t have enough info, and to skip the vote since it’s early on in the game.

For regular tasks, only crew members can do it. Imposters are given fake tasks to blend in with the group. Since there is a task bar at the top of your screen, you can watch it to see if it moves or not. As an imposter, I sit at the tasks and pretend to fix them as if I were a crew member. I have learned you want to act as normal as possible, so people don’t accuse you of being the killer. That way when it boils down to the final people, it is a lot easier to lie and have people believe me. I pretend to swipe my card and wait til the task bar goes up before I leave.

As I am walking around, I see Yellow looking at the security cams by himself. I trap him inside the room with me, kill him, and vent out. I then call the oxygen sabotage, since it is the farthest away from that room. I don’t want to be seen with Yellows dead body, I meet up with Cyan again as we fix the oxygen together.

Lime’s dead body was reported, as I tell everyone I was with Cyan fixing oxygen. I had not killed lime, so I hope that they forget yellow died this round and not blame me. “I think it’s Black, I saw him and Lime together last.” Cyan says. Everyone starts asking both Cyan and Black lots of questions. I kept quiet, hoping that I could blame someone else. “I saw Black vent.” Red sent in the chat, making black caught red handed.

I had to blend in with the crew members, so I voted Black out and backed up Cyan’s claims. I needed them to trust me, even if that meant voting out my fellow imposter. If I was the only person who didn’t accuse Black, people would automatically be suspicious of me. Even though he has helped me kill the crewmates, I did not have the votes to keep him. We all voted black, except black who voted to skip the round.

I stayed with Cyan for the most part, I left him a few times to do some quick kills. Red reported a body, and it was down to Cyan, Red and I being the last alive. Questions start flying left and right, asking everyone’s wear abouts, what tasks have we done. I could tell both Red and Cyan started to stress out as they tried to figure out who the imposter was, as I tried my best to convince them it wasn’t me by accusing Red of a self report. This point of the game is always the most stressful, since they have to vote. If they skip or vote the wrong person, they lose and imposters win.

“It’s purple.” Red said. “It’s Red, I’ve been with Cyan the whole time doing tasks.” Both Red and I voted, as we waited for Cyan to decide who to vote. In the final seconds, Cyan voted Red. The screen turns to red falling into space.

Red was not an imposter. 1 Imposter remains.