COVID-19: How should we be reacting? 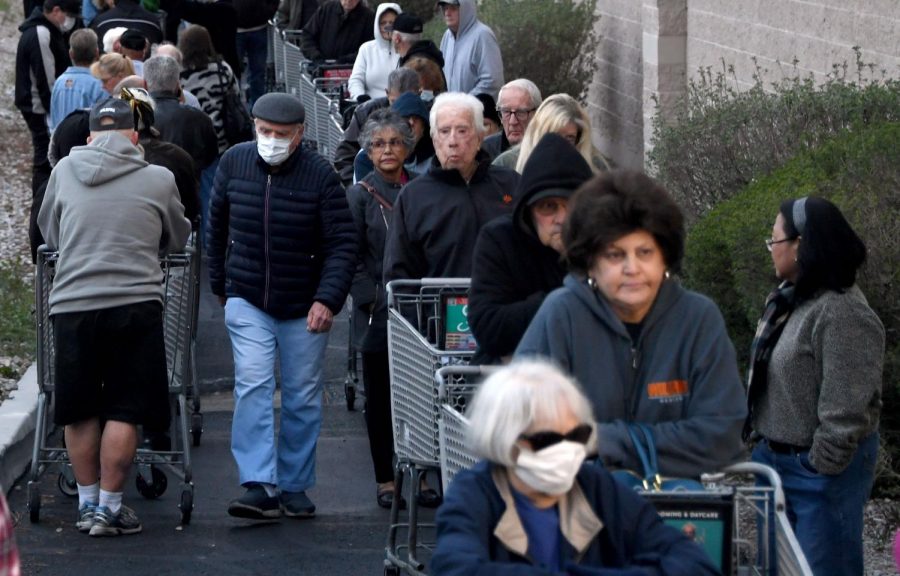 Shoppers in Las Vegas form a line around a Smith's Food & Drug as they wait for the store to open March 20, 2020.

In light of the recent coronavirus pandemic, healthcare providers worldwide are encouraging the public to self-quarantine as a means to halt the spread of the virus. As a result of this precaution, you’ve likely seen two public reactions on social media.

On one hand, you have the people who have hit an internal panic button. They’ve rushed to the supermarket, stockpiled a six-month supply of toilet paper, and are currently practicing self-isolation.

The other hand holds the people that are ignoring all warnings and are going about their day as if a national emergency hasn’t been declared. This set of individuals have most likely said something along the lines of “It’s just another strand of the flu” or “It’s like a bad cold and only attacks old people, I’ll be fine.”

When looking at both perspectives, the question at bay is: How should we be reacting to COVID-19?

The most common misconception about coronavirus is that it’s far less dangerous than the flu, a primary reason that the public isn’t registering it as a viable threat. Upon interviewing Ben Jacobson, a research assistant from the Harvard Global Health Institute, this spread of misinformation was debunked.

“The flu death rate is 0.1%,” Jacobson said. “With coronavirus, we’re seeing death rates more in the 2%-3%, significantly higher than the flu which is concerning and why we have to take this so seriously.”

The drastic jump in death rate statistics is alarming, but should be used as a reason to oblige by the recommendation to self-isolate.

The horrifying truth about this virus is the toll it’s taken on hospitals and testing in terms of capacity.

“Testing has been really challenging here in Massachusetts and across the US,” Jacobson said. “We haven’t made enough tests, we don’t have the facilities to process those tests quickly enough. If you look at a country like South Korea, they’ve been averaging about 15,000 tests per day. If you scale that to the US population, we should really be doing about 100,000 tests per day and we’re nowhere close to that.”

An overlooked factor to the spreading of this virus are those who are asymptomatic, this makes it nearly impossible to know if one is carrying it without taking a test. Jacobson agrees that we should be testing asymptomatic people if there is belief that they’ve been exposed to the virus, but due to the shortage of testing kits, they are unknowingly spreading it.

“The only real way to contain it is to separate everybody for the time being,” Jacobson said.

As for hospital beds, nothing could’ve prepared the country for a “once-in-a-century” event like this. On an everyday, non-pandemic basis, people are treated and cleared to leave the hospital within a reasonable amount of time, meaning that there is no use for an abundance of hospital beds.

“It’s challenging to say that we should’ve had more beds,” Jacobson said. “In general, 30% of the beds in US hospitals are open. Even if it’s every hundred years, these events do happen. We need to be aware that they could happen, and be ready for them.”

Not having enough beds does not mean that hospitals have to resort to rationing care, the next step would be to cancel elective surgeries that are not the fine line between life and death (like a hip or knee replacement).

The rumor that this pandemic will blow over in a few months is false. Harvard Global Health Institute’s analysis is on the six-month to one-year span, meaning that a year long period of social distancing is possible in order to prevent a “second peak.”

“If everybody gets tired of being at home after one month and starts going back to work then we’re going to lose the progress we’ve made,” Jacobson said.

Using China as an example since their number of infected people has depleted, Jacobson explained that once isolation restrictions loosen and people begin to go back to school and work, the spreading of the virus will begin again, and thus create a second peak of chaos.

“If we’re willing to impose these restrictions over a long period of time, we definitely can flatten this out to eight to 10 months, even a year,” he said.

While a year in isolation may not be realistic in terms of the economy and public patience, it isn’t unreasonable if it will keep numbers down until a vaccine is ready.

“People talk a lot about a vaccine, once we have an effective vaccine we can put a stop to this because we can stop transmission and build people’s immunity,” Jacobson said. “The truth is, a vaccine is probably at least one year away.”

While there are teams working on expediting this vaccine faster than any other, there is a copious amount of testing that has to be done, delaying the process as a whole.

At this juncture, it’s safe to say that coronavirus is something to be concerned about. The proper reaction would be to treat it like the deadly virus that it is and to stop unnecessary human contact. So far, the only overreaction to the coronavirus is the overbuying of certain goods, such as paper face masks for those who aren’t ill. Most face masks that are being purchased don’t contain a fine enough filter to stop the virus from entering the body. The N95 masks that are thick enough to withstand the virus are being purchased and resold at absurd prices, taking them away from the vulnerable doctors and nurses that need them the most.

“As far as our data shows, the coronavirus is a very big deal and I don’t think it’s possible to overreact in terms of social distancing. If we underreact, the cost is going to be human lives,” Jacobson said.

While American politicians may have led you to believe that this is a hoax, it can’t be emphasized enough that science is proving otherwise. The more we delay taking this seriously, the more that human lives are put in jeopardy.